Key factors that I am looking at – to decide what to buy and what not.

Recently, there have been lot of discussions around this subject. Over the last one year, Indian auto sector in general and Car segment in particular has gone through a difficult phase that has led to significant price corrections in all the three Companies – Maruti, Tata and Mahindra.

Given the steep correction in the stock prices, analyst community is divided – for some, it’s a value buying opportunity and for others, the worse is not over yet.

On both sides, the arguments are equally compelling. Therefore, to take my own decision, I decided to look into the following key factors: 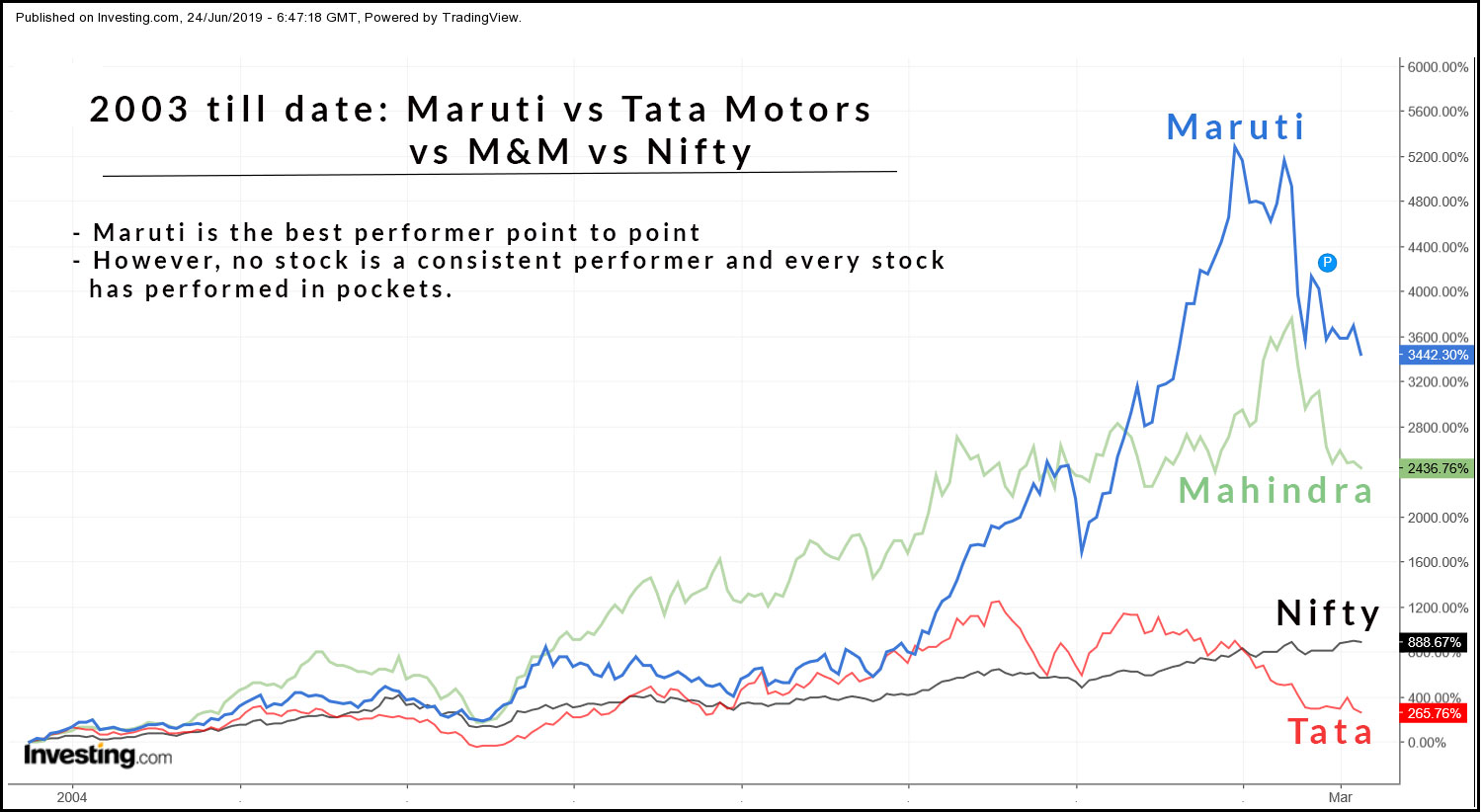 Maruti has been the best stock for patient investors. To active investors it can be frustrating for long periods wherein others perform better.
Maruti gave a CAGR of almost 25% since listing till date and this is despite it getting corrected by 35% from the top in the last one year. Adjusted for that, the CAGR would have been closer to 30% which is amongst the best across all the sectors.

Mahindra has also been a good consistent performer. Tata is the only one out of the three that has been most volatile and infact since 2015 it has been a significant underperformer – price has declined by almost 75% !

Purely on valuations, Mahindra seems to be the most attractive.
Technically none of the stocks are strong, though all close to their long term support levels.
3. Pure Play vs Diversified Play
Maruti is primarily into Cars whereas both Mahindra and Tata are diversified. Personally, I like more of pure plays.
Tata is also into Commerical Vehicles (CV), whereas Mahindra along with CVs is also into tractors. Both also own brands overseas.

Most of the times, investors don’t give due importance to this factor and believe that more is the merrier. Though sometimes it does help, most of the other times it acts as a spoiler. No better example of this than Tata Motors, where one of the segment always pulls down the performance of the other segment.

So yes, diversification helps but then one needs to be very careful ! 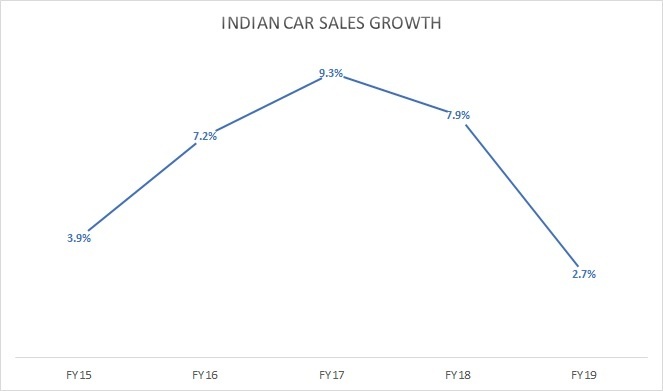 Car sales in India have slowed down significantly in the last one year and in FY 2019 it only grew by 2.7%. In April and May 2019, the sales are further down by 20% yoy and even if the rest of the year is not as bad, FY 20 might again be a muted year. Key factors that led to the slowdown include low GDP growth, tight liquidity conditions, general elections, unemployment and poor farm incomes.
I am not overly pessimistic about the sector. If Indian economy is expected to revive, autos cannot stay behind and have to start performing.
Its difficult to say whether the worst is behind us but sooner or later the Indian auto sector including car segment is bound to stabilise and start recovering. New government with significant majority is in power, financial budget is round the corner, monsoon season is kicking off, interest rate environment is supportive and financial sector should start getting back on its feet.

Further, I believe that BS VI implementation from April 1, 2020 would be easily managed through by most players. Most seem to be well prepared.

I hate talking about macro comparative numbers for India (with our population everything looks underpenetrated and promising), but this one is interesting –

2018 Indian Car sales of 3.3 mn vehicles was same as that of China in 2005 !
Kia and MG can be two worthwhile competitors to watchout for
Indian car market has always been fancied by every top global player. Most are already present in the country albeit with small market shares (GM decided to withdrew few years back).

Kia and MG are the two latest entrants in the Indian market and both have just launched their first products. 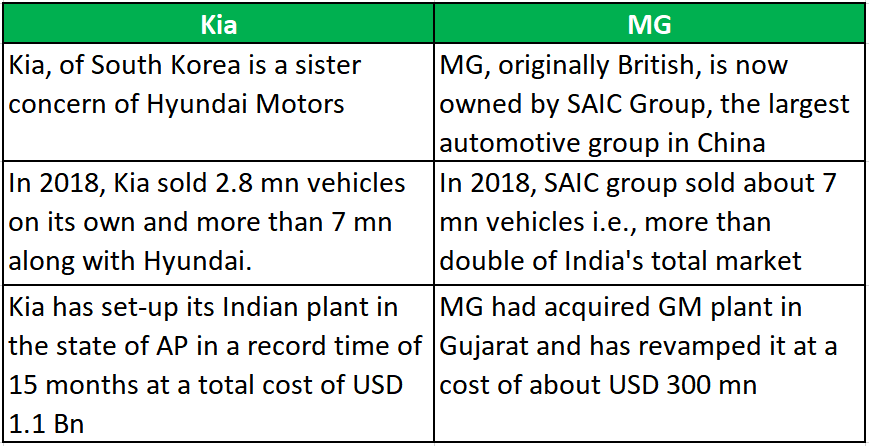 Both the Companies are well reputed, have strong brand recalls, belong to a large group, have committed significant resources towards India and are focused on creating a differentiated product along with  proper dealer network and support infrastructure.
For now, both seem to be focusing on the SUV segment and hence more of impact for Mahindra and Tata in the short term.
The initial product impressions are good and the pricing is expected to be  competitive as well. Either or both of these can turn out to be important players in future – Kia with its alignment and hence joint strategy with Hyundai who otherwise also is the second largest player in India and MG due to a unique mix of British flair with Chinese ownership.
Suzuki-Toyota cross badging tie-up can have large implications for Maruti’s Indian operations
Since 2017, Toyota and Suzuki started partnering with each other to jointly develop products and technologies. Further to that in 2018, Maruti and Toyota in India announced cross badgeing of their respective products to build on the synergies.
Toyota unlike most of the competition in India, scores high on aspirational brand value and  customer confidence.
The first product out of this tie-up is Toyota Glanza which got launced few days back and is the rebranded version of Maruti Baleno – one of the best selling cars of Maruti. Interesting to note here is how similar both of these cars look – there are minimal differences. 5. Electric Vehicles (EV) Impact
EV may not be of immediate impact. Its success and timelines would be mainly a function of charging technology and infrastructure.
EVs are the future and are bound to happen. Timeline is anybody’s guess and would depend on various factors. Government on its part is holding regular discussions with the industry.

Currently, it’s very difficult to take a call on any stock based on the EV factor. Every Company is working towards it and one needs to follow the developments closely.

Above is the comprehensive list of all the factors that I am considering to make my own decision. Different factors seem to be pointing towards different stocks. What one chooses is entirely the function of his/ her own investment strategy.

Disclaimer: These are my personal views and not any recommendation to the reader. The reader should do his own independent research before taking any investment related decision.