Most discussed topic over the last few days – my takeaways as a stock market participant..

Continuing with its thrust of cleaning up the Indian banking sector, the Modi government on Friday (August 30) announced the merger of top Public Sector Banks (PSBs).

With this latest round of mergers, the total number will come down significantly from 27 PSBs in 2017 to 12 PSBs post consolidation. 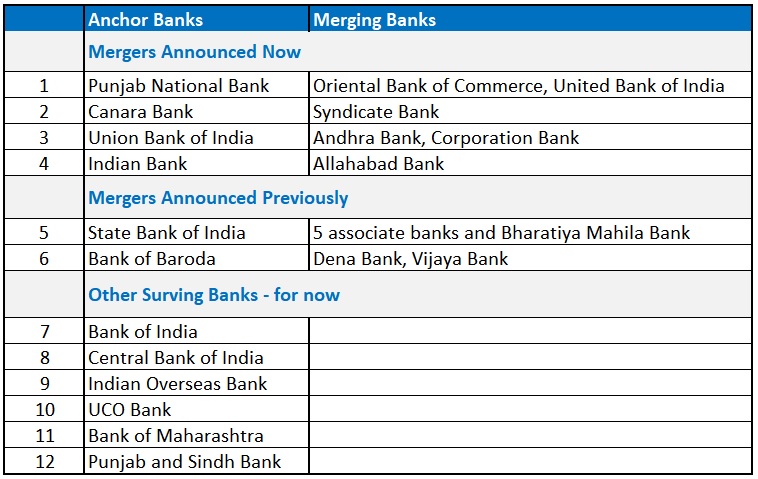 Rationale behind the mergers/ consolidation?

Time and again it has been argued that there are too many public sector banks in India leading to inefficiencies and hence the need to consolidate. The discussions further gained momentum in the last few years due to worsening asset quality of India banks in general and PSBs in particular.

Fundamentally, I completely agree with the logic and rationale.

Are the combinations perfect?

Given the diversity of factors, there can never be a perfect solution and any merger always involve compromises.

The objective is to create best possible synergies with least possible headwinds.

Based on various viewpoints and discussions happening around the subject, it’s very difficult to comment whether the announced combinations perfectly meet this criteria. However, I believe that the government would have worked with the best possible available alternatives.

While making the selections, I do believe that a greater emphasis has been put around the technological compatibilities of the merging banks – which is very critical to ensure a smooth operational integration.

Is the timing correct?

Government started the PSBs consolidation drive in 2016 and the current merger announcements are continuation of the same. The announcements coincided with the economic revival measures undertaken by the government recently.

In the last few months, there has been a continuous flow of negative news around the Indian economy and situation seems to have worsened drastically. GDP growth numbers are concerning, auto sales is at multi year lows, liquidity situation is tight, asset quality of banks continue to remain questionable, corporate bigwigs have sounded alarms, economists and analysts have cut down the estimates drastically.

Under the current economic situation, I personally see mergers announcement to create more hurdles in the recovery process.

Mergers take time to settle down. There are varied interests that are required to be managed. Liquidity in the market is tight and government has been trying hard to address the same.

I sincerely hope that merger related disruptions don’t create hurdles for the borrowers and further dent the already suppressed sentiments (my regular readers would relate this with my previous articles, wherein time and again I have been highlighting poor sentiments to be the main reason for the current economic slowdown).

Examples of merger related disruptions for the borrowers – strikes by the trade unions, movement of banks’ manpower, newsflow, tighter collateral/ credit terms/ infromation requirements from the borrowers of the weaker merging banks by the stronger anchor banks etc.

Am I getting positive on PSBs?

Traditionally, I have rarely invested in PSBs. Most of the times, my investments in the private sector have fared better due to varied reasons.

However, I have a background of being a banking analyst and a value conscious investor – so yes, I do keep a watch on PSBs.

Whether the announced mergers are making me attracted towards PSBs……. No !

Its a classic case where my heart says ‘yes’ but mind says ‘no’ – there are many variables that need to be kept in mind while making an investment decision. I continue to keep a close watch !

It's not important to buy every business that looks promising..... only the ones with higher conviction are important ! Click to Tweet