First rains after a long drought…. bulls on a rampage….. bears struggling to find a cover…. atleast for now !

In a bid to revive the struggling Indian economy, the Finance Minister (FM) announced a major overhaul of the Indian corporate tax system on Friday (September 20, 2019).

Also, the high surcharge on stock market capital gains introduced in FY20 budget has been withdrawn.

Since the announcement, Nifty has increased by about 9% in 2 days and is now only 4% away from the all time highs. There is a lot of optimism amongst investors in general and most are calling it the second greatest reform in the Indian history after liberalization of 1991.

Personally, I do agree that it’s a bold and much needed move, that can do wonders to the long term fortunes of our country.

Impact on stock markets? The factors that I am considering

1. Rationale to cut the corporate taxes

Lower corporate taxes was a long pending demand from the industry and the investors.

This is both from the perspective of incentivising domestic businesses to expand and attract foreign companies to set-up businesses in India.

ETR of 25.17% for existing Companies and 17.01% for new manufacturing units is highly lucrative and completely changes the rules of the game. I can surely imagine many Companies already drawing plans to set up new facilities and many so creatively !

Post tax cuts, we have also become one of the cheapest compared with the other developing economies. 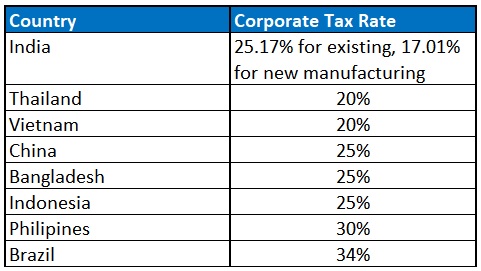 This along with our large english speaking manpower should draw significant interest from the global manufacturers. Land availability, supporting infrastructure and regulatory approvals are the other key factors that would determine the success on this front.

Since Friday, there have been various opinions on the quantum of impact that reduced taxes will have on the reported EPS of various Companies and the index. The estimates for Companies vary from 0% to +29% and for Nifty +10%.

Points that I am considering to try gauging the impact –

I don’t recommend that we should assume every penny saved through lower taxes to translate into higher earnings, especially in the short term – given the current economic slowdown and upcoming festive season.

Yes, agreed that the announced cuts are going to positively impact the profits for ever and accordingly the fair values should be revised upwards. However, for now I would revise assuming maximum of 50% benefit to accrue towards EPS accretion – so maximum of 7.5% higher EPS. I may revised this upward as economic situation revives.

3. Sentiment booster for the promoters and the stock market bulls

This I believe is the most important impact of the announced tax cuts on an immediate basis.

Promoters and businesses are the happiest lot. Their long pending demand has been met. They get liquidity that can be utilised for varied purposes – business growth and expansion, debt repayment, rewarding employees.

Stock market bulls – finally get an important weapon to fight the bears. The stock market reaction over the last couple of days is testament to this – bulls are on a rampage and bears looking for cover. Nifty recorded the second best day on Friday in last 10 years and has increased by 9% in last 2 days. It’s now only 4% away from the all time highs.

The beauty of this weapon for bulls is – it’s real (a major policy action) as well as hope (needs time to unfold).

Unless the economic or external situation worsens drastically, bulls can continue to use this to scare off bears !

4. Economic situation may need some quick fix demand side solutions

The current economic slowdown is primarily a demand side issue vis-à-vis supply side constraints.

Please refer my pre-budget note Expectations from Budget 2019 – a common man’s perspective ! for what I believe are the reasons for the slowdown.

Announced tax cuts make the supply side happy. Agreed that some of this will transmit towards the demand side – lower product prices, higher employee salaries, expansion driven new employment generation and so on. However, most of these measures will take time.

Price cuts is the only immediate demand side transmission that I can currently think of. Extent of the same remains to be seem.

5. Implications for the fiscal deficit

Government estimates tax revenue loss of Rs 1.45 lakh crore due to the announced tax cuts. This would directly increase the budgeted fiscal deficit for FY 20 from 3.3% to 4.0%. However, NITI Aayog (Government’s policy think tank) expects the impact to be much more limited – tax cuts to prompt increased economic activity and hence higher tax collections.

As a stock market investor, I am keen on fiscal discipline but not extra obsessed with it.

Few basis points I don’t believe make as much difference as it is sometimes publicised. Yes, it has interest rate implications but then we can’t just keep on focusing on one factor ignoring other variables.

I also believe, Government would be able to manage the fiscal deficit within acceptable limits by putting greater focus upon –

One important point to mention here is – crude price related shocks. It especially becomes important given the ongoing dispute between Iran and Saudi Arabia. Although, India has got assurances to get the requisite supply of crude at right prices, if the dispute gets escalated, it can have significant implications for the Indian economy and the fiscal discipline.

Tax rate cuts have helped mitigating the concerns around domestic economic situation. Consequently, the interest seems to be reviving in the domestic stock markets…. at least for now.

What one also needs to keep in mind are certain other important internal and external factors as I have been consistently mentioning in my previous notes. These include – Kashmir issue, global growth concerns, Hong Kong protests, Brexit uncertainty and US getting into an election year with a very unpredictable sitting US president.

We cannot move in isolation to the global markets – especially if the latter were to correct significantly.

The long awaited tax cuts are now a realty. Government has provided the much needed sentiment booster to the promoters and the stock market participants.

What promoters do with saved taxes, remains to be seen. Meanwhile, bulls are running wild and bears waiting anxiously !

“There is nothing riskier than the widespread perception that there is no risk.” — Howard Marks Click to Tweet
“The stock market lives longer than anyone of us. Therefore, don’t trade all your capital like there is no tomorrow.” — inspired from Benjamin Lee Click to Tweet

Disclaimer: These are my personal views and not any recommendation. The reader should do his own research before making any investment related decision.

I would like to suggest if the corporate and personal tax are put at a straight 10%, and import duty from China is increased sharply, then may be our economy will see a huge growth and the increased gdp will cover all the fiscal deficits.