GDP growth revival is being seen as an important objective of this budget. The path to recovery might be ‘different but simpler’ than most believe.

Come July 5, 2019 and every eye will be on the newly elected Finance Minister of India (FM), Ms. Nirmala Sitharaman, as she presents the annual budget for FY 19-20. The expectations from the budget are building up, especially in the backdrop of declining GDP growth over the last one year. 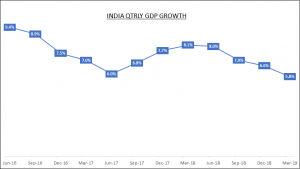 Pundits, economists and industrialists are busy throwing geek words, doing complicated maths and discussing the list of dos and don’ts for the FM. The main point of discussion seems to be focused around providing fiscal support to the economy or not.

Most seem to be in favor of providing the fiscal support (leading to more money in the hands of the consumer) with the exception of Purists who seem to be against (due to the higher fiscal deficit implications).

When I watch and read these opinions, I wonder how most experts are only busy suggesting the solutions and only a handful actually trying to get behind the real reasons for the slowdown !

Slowdown has come as a surprise to most people. The fact remains – I can’t remember many people who had predicted a slowdown at the beginning of 2018 when quarterly GDP was increasing and the growth was around 8%. Most of the companies on the contrary were talking about revival (post Demonetisation and GST hiccups) in their earnings conference calls. So what exactly happened, why did growth slow down so significantly?

I as a consumer, observer and a commoner believe that the main reason for the current slowdown is – sentiment, sentiment and only sentiment. There is a sense of uncertainty, a sense of caution, a sense of holding back.

The factors that may have contributed towards these sentiments are –

1. Poor returns on investments
Real estate (traditionally favorite amongst Indians) has been muted for the last 5-6 years. People diversified towards the financial markets but since Jan 2018 had a poor experience, first in equities and recently also in debt.
2. Corporate shake-ups
During the last one year, India has seen some big Corporate problems/ failures – IL&FS, Yes Bank, Jet Airways, Reliance Anil Ambani Group, DHFL, Zee Group. All these are marquee names and their names cropping up one after the other have shaken up the confidence of the public at large – the more so, as all of them are from different business segments.

No one is sure whether this is it …. the general query is, who would be next?

3. Noose tightening by the Auditors, Credit Rating Agencies, Independent Directors
Government has taken stringent actions against some of the entities associated with the above mentioned Corporate shake-ups. As a natural fall-out of that, the auditors, credit rating agencies and independent directors have become extra cautious, especially towards many small and medium sized entities.

The result – no one knows where will it stop.

4. NBFC liquidity squeeze
First IL&FS and then DHFL – resulting in extreme tight liquidity situation for NBFCs. They played an important role in pushing the consumer credit and hence consumption in the last few years. They were everywhere – fighting for space with auto companies, mortgage loans, consumer durables.

Not that they have completely disappeared, but in the current scenario of much tighter funding, the visibility as well as push is much more muted.

5. Poor rural economy
Dependent primarily upon agriculture, the rural economy
has been struggling for a long period of time – further dampening the demand from that segment.
6. Fear of the unknown
This is more to do with the ill effects of “Whatsapp University” – there is a continuous flow of messages around tax raids, capital gains taxes on shares, benami property, corporate offenders, property dmat accounts etc. Though many may be factually incorrect, they have created the fear of the unknown.

I am intentionally not pointing out elections as a reason, as I don’t believe that it would have significantly impacted the sentiment. And if it had, then in any case the event is over and hence no future implications.

Further, I am also not mentioning unemployment, as the same has been disputed officially.

Measures that can potentially improve the sentiment

The quickest way to significantly improve the sentiment is to provide large doses of monetary (cheaper money) and fiscal (tax concessions) liquidity in the hands of the consumer. However, that is not practically possible. Couple of tax tweaks here and there may not create the desired impact.

1. Measures to revive the real estate sector
Real estate has been a significant sector in India and has been lying dormant for long now. Systematic revival of this sector can provide a significant boost to the consumer sentiment. Besides, as per estimates almost Rs 4.75 lakh crores of NBFC money is due for renewal by March 2020. Revival of the sector would also mean smooth transition of this maturity, further improving the sentiment around NBFCs.

Measures announced around Real Estate can potentially create immediate and significant impact on consumer sentiment both in terms of past and future investments. Real estate generally has wider implications for many other sectors also. Besides, the sector has significant revenue potential for government as well – registration charges and tax on capital gains.

2. Clear message wrt the financial sector
We are going through a period of significant uncertainty around this sector – first with banks and then NBFCs. Government besides taking various steps to cure the situation has gathered lot of information from multiple sources.

It can go a long way in changing the general sentiment, if a clear messaging can be given about this sector on various fronts – capital/ liquidity support mechanism for public sector banks/ NBFCs, conclusive asset quality review report on the sector, steps to prevent similar problems in future etc.

3. Time for the Carrots
This is applicable for both the consumers and the businesses. The fact remains that multiple clean-up initiatives have been taken in the last few years – Demonetisation, GST, Dormant Companies, Raids/ Searches, tightening of the Auditors etc. All of us agree that they have been mostly in the right direction. However, now may be the time to also compensate and offer carrots. Carrots not in terms of providing huge money or exemptions but recognition/ awards for good work, fiscal incentives for good behavior, government contracts to the performers, quick resolution of tax or other disputes. I had written for the carrots way back in September 2017 as well (please refer the link).

The government needs to be really creative here and also ensure adequate marketing/ awareness of all the efforts in this direction.

4
. Voluntary Disclosure Scheme (VDS)This year’s budget might be the best time for government to announce any VDS – one time tax payments for disclosing undeclared income/ assets.

The new term of the government has just started and everyone knows about its relentless and zero tolerance policy towards black money. I would not be surprised if VDS actually works well under the current scenario.

5. Structural announcements for Agriculture sector with clear timelines
Lot is happening for this sector but lot is left to be desired. Some significant structural announcements (related to irrigation and supply chain), with adequate budgetary provisions and clear committed timelines would go a long way in bringing sustained confidence on the Indian economy.

Above are my key expectations from the budget – a commoner’s perspective. The focus is only on the points that I thought might work well in improving the overall sentiment. Needless to say, a budget is a much more comprehensive exercise. Focus on infrastructure, government spend, make in India, defence, social welfare schemes, fiscal deficit roadmap, tax tweaks, are all given and would surely happen.