Indian Public Sector Banks – have they bottomed out?

I rarely do bottom picking. After a long time, I am getting enticed to do so. Checkout, if it makes sense…

Indian Public Sector Banks (PSB) have been one of the biggest wealth destroyers over the last 10 years.

You pick any known name (except State Bank of India) and it would have corrected by 80-90% from the peak. Even SBI has grossly under performed compared to the private sector counterparts e.g., HDFC bank or Kotak Bank that have increased by 6-8x during the same period.

Checkout the below performance comparison charts.

Sometimes it’s unbelievable how much PSBs have corrected. E.g., Punjab National Bank (PNB) has corrected by almost 90% from it’s peak and this is despite the fact that now PNB is actually PNB + OBC + United Bank of India.

As for the reasons of under performance of PSBs vs Private Banks (PVBs), it’s primarily the continued deterioration of the asset quality i.e., recoverability of the loans given by them to the borrowers – technically called as Non Performing Assets (NPAs).

NPA is the most significant parameter to understand the quality of operations of any lending institution. Higher NPAs impact profitability, returns, capital raising and overall confidence in general.

Lending is the core activity of any bank and if it is unable to provide the confidence that it can recover the money that it has lent – then it is safe to assume that it doesn’t know what it is doing ! 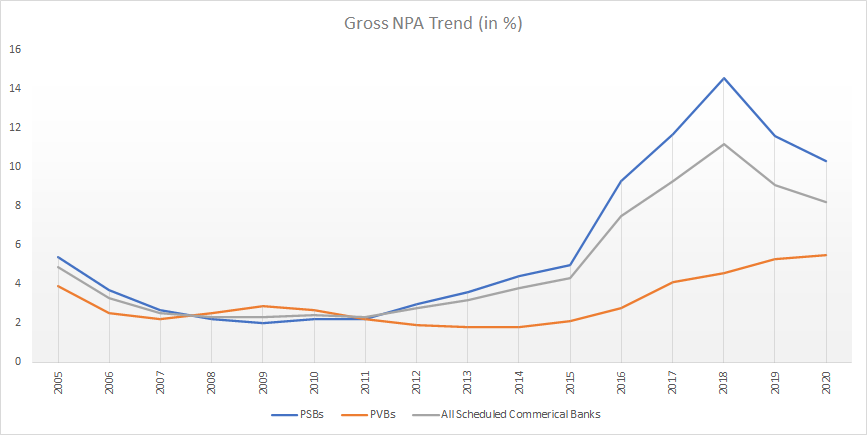 As can be seen from the above chart, NPAs of PSBs started increasing since 2010 (the similar timeline when divergence started between the stock price performance of PSBs and PVBs). Yes, the NPA levels have started coming down since 2018 and therefore the stock prices should have ideally raced ahead, but please note –

So have they bottomed now and why?

Before trying to address that, let me quickly list down the reasons for increased NPAs for everyone’s benefit. This will also set the basis for my reasons subsequently 🙂

Why PSB’s are more vulnerable to the economic downturns

They lend to a much wider audience compared with the PVBs. Their borrowers would include a farmer, a small shop owner, a professional, an industrial and also a large steel plant. Reasons –

All the above ends up creating lapses in the overall credit and excesses in their books when the economy is booming and credit demand is strong.

The same comes back to haunt PSBs when economic growth mutes.

Reasons for me getting positively inclined towards PSBs

1. We may be nearing the end of NPA cycle

This is both because of clean up efforts over the last 6-7 years and economic outlook becoming stronger.

NPA% (please refer previous chart) has been declining over the last couple of years and with economic outlook becoming stronger, it may continue to do so.

Now before you counter me with Govt suspending/ delaying recognition of NPAs (both pre and post Covid) being one of the reasons for the same, I do accept that is correct. However, I would have been more worried about it, if economic outlook was to be muted.

Economic growth leads to higher new credit demand and also revival/ takeover of some stressed businesses. Both of these should ideally help banks’ books and keep their NPAs in check.

Whether economic revival is temporary or sustainable? Difficult to comment with surety and would be more clear over the next 2-3 quarters.

My base case (for sometime) is that worst is over and with hiccups we are set for a decent growth phase. I have written number of articles on this and you can refer the following two for the details – COVID2019 – is it a blessing in disguise for the Indian economy ! and Is it time to buy the Indian midcaps – Update November 6, 2020

However, everyone has his personal opinion on this and if you are someone who is negative on the Indian economy, you should not look at investing into PSBs.

Another point to keep in mind – RBI sooner or later will be compelled to withdraw the suspension/ deferment of NPA recognition and whenever that happens, fear and uncertainty is bound to set in. However, if the overall economy is supportive, I may use that opportunity to buy into the correction – both into PSBs and PVBs.

2. PSBs are here to exist, maybe with more underlying strength than before

One might wonder that given their past track, whether they should even be in business. Why can’t everything be handed over to the private sector?

We can keep hoping for it but it’s not going to happen or I should say will happen selectively. There are varied reasons for it – social, commercial and political.

The fact remains – almost 2/3rd of the credit as well as deposit market share is still controlled by PSBs. Customers have an underlying trust on them and that is unlikely to be shaken anytime soon. Yes, PVBs will keep creeping in, but it would be decades before PSB’s would lose their relevance (if at all).

The current strategy of regulators/ government also seem to be strengthening them and not extinguishing them. Consolidation of weaker banks into larger banks and selective privatization seems to be the preferred route and rightly so. In a country like India, with so much diversity, PSBs play an important role and need to be encouraged to continue doing so.

Have a look at the following cost and return of funds across bank groups (taken from RBI reports). PSBs costs as well as returns are lower giving them a lower spread compared with PVBs. However, as mentioned before this is due to their different customer profiling and varied other reasons that cannot be easily avoided in a developing country – to target a more inclusive development. The good thing is that with controlled asset quality these can be decent numbers to generate reasonable overall returns.

It’s also worth mentioning here, not every private bank is efficient. There have been ample examples of failures/ frauds in PVBs also. In fact, successful well run PVBs continue to be only handful. If you want to verify, look into their detailed segment performance (i.e., banking and treasury) – I am sure you will agree with me.

3. If asset quality is in control, valuations is not a challenge

Banking is a business where balance sheet size plays a key role in overall returns. On this count, most PSBs don’t have a challenge. In fact, as mentioned before, they still account for almost 2/3rd of total deposits and credits.

Specific example – SBI is more than twice the size of HDFC Bank but is less than half in market cap.

Obviously, PSBs will never be able to command similar valuations as PVBs due to lower return profile and overall inefficiency of operations. However, with better asset quality, the valuation differential might start contracting.

From 2004 to 2010 (LHS), PSBs were matching up with PVBs and post that the gap just kept on widening (RHS). What I am hoping is some of this gap to narrow down as we move forward. If that happens, PSBs can move significantly from the current levels.

Banking is a business that is based on trust. PSBs on that count have least resistance. With economic tailwind and hence increased credit demand, their legacy NPAs may start looking small and also some of them may start getting resolved.

With these two happening, PSBs may suddenly start looking attractive to the value buyers first and momentum buyers later.

As the sector is heavily beaten down, it may be a perfect turnaround story and all of us are aware what can happen in such cases.

Not that this would be a one way upward movement from here. Heated global markets, RBI withdrawing the NPA relaxations and higher commodity prices impact on the corporate earnings may provide multiple entry points.

Disclosure: Above are my personal opinions and not any recommendation. The reader should do his own research before making any investment.

Superb explanation sir, please keep to sharing with us

Thanks for the write up Sir! Definitely a much needed explanation articulated concisely.

Your articles make complex things simple to understand. Also, an unbiased view, giving credit where due– need of PSB’s & Government measures after 2014, for containment of NPA’s, gave a balanced picture. Thanks.

This is too good